« Dell Mini 3i: something in between iPhone and Palm Pre
Virtual keyboard for Apple Mac iTablet was found in Snow Leopard » 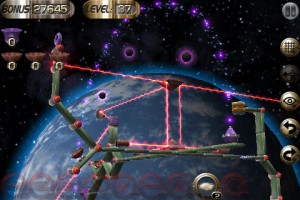 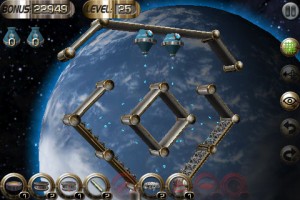 Enigmo [] was originally created in 2003, and since has become Pangea Software's most successful game. It was voted the "Best iPhone Game" of WWDC '08.

The goal of Enigmo is simple, water falls from droppers and a certain number of drops need to make it in to the tank at the end of the level. Utilizing a limited number of objects from the variety of different ones that make up the puzzle pieces in the game such as bumpers to bounce drops off of and sponges to collect drops, etc., the gameplay of Enigmo started simple but quickly made way to levels that would leave you stumped for days.

Enigmo 2 [] took the award winning gameplay of the original, made everything 3D, and even added lasers and plasma particles that must also be directed to their respective containers. Enigmo 2 takes place in space, and gravity plays an even bigger part than the original with objects that can be dropped in game to manipulate gravity to steer the plasma particles around.

User can rotate the world using two finger swiping gestures, and some puzzles will require the placing and manipulating of objects in 3D space to complete the level.

Pangea Software released demo video that details nearly every corner of Enigmo 2, and is really worth:

« Dell Mini 3i: something in between iPhone and Palm Pre
Virtual keyboard for Apple Mac iTablet was found in Snow Leopard »