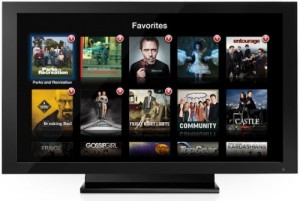 Piper Jaffray's Gene Munster told that he had recently spoken to a "major TV component supplier" about Apple's rumored plans to release its Apple TV and received the following answer that Apple had contacted at least with one supplier "regarding various capabilities of their television display components."

In January 2011 Apple reportedly held a meeting in Asia that suggested Apple was investing in manufacturing facilities for LCD displays as large as 50 inches and in September 2011 the company held another meeting with a "contact close to an Asian supplier" who claimed prototypes of an Apple set are in the works. Now Piper Jaffray believes that Apple will likely release its television at the end of 2012, though, as usual, the timeline could be changed at any moment.

Various reports suggested that Apple experienced problems with movie and TV studios that are believed to be hesitant to license their content for an Apple television. Though, Apple could simply enable the television to manage pre-existing live TV service from a unified interface, or it could make use of network programming and web-based video services such as Netflix and Hulu. Finally, Apple could start offering monthly subscriptions "on an a-la-carte basis" for live TV packages from content providers.

"Since we know Apple is exploring television hardware, we are therefore led to conclude that the company is exploring a solution for live TV, and this solution could be one that has not yet been taken mainstream," he said.

Piper Jaffray expects that Apple could sell 1.4 million of the 106 million internet-connected televisions estimated to be sold this year. The investment bank tentatively estimates that revenues from the device could reach $2.5 billion in 2012, $4.0 billion in 2013 and $6.0 billion in 2014.