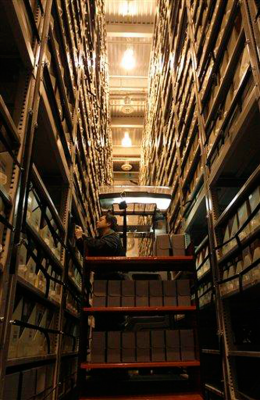 In late 1990s, when Apple had some financial hardships the company elected to turn over its trove of materials to Stanford University's Silicon Valley Archives. Apple had been collecting the materials with the intention of forming its own company museum. The materials include "hundreds of box" requiring more than 600 feet of shelf space and has early photos of a young Steve Jobs and Steve Wozniak, blueprints for the first Apple computer, user manuals, magazine ads, TV commercials, company t-shirts and drafts of Jobs' speeches.

The university hopes its efforts will ultimately help historians, entrepreneurs and policymakers understand how a startup launched in a Silicon Valley garage by two college dropouts grew into the world's largest company.

"What they were doing was spectacularly new," said Stanford curator Henry Lowood. "The idea of building computers out of your garage and marketing them and thereby creating a successful business - it just didn't compute for a lot of people."

Among the other items in the Apple Collection are: