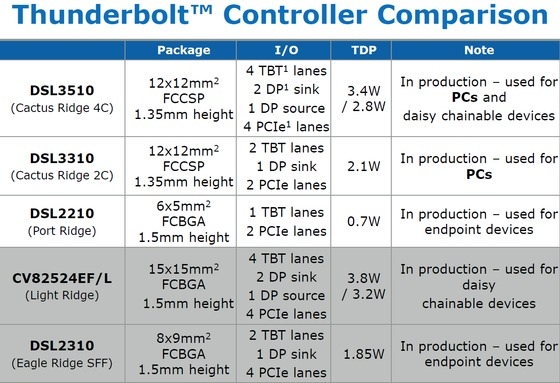 Last month CPU World reported that Ivy Bridge CPUs would launch between April 22 and April 29. Today and many other sources reports that Intel will start rollout on April 23. Many of the Ivy Bridge chips included in the first part of the launch will be suitable for desktop computers and MacBook Pros. However low-voltage U-Series models that will likely be used in the new MacBook Airs are expected in June.

Another today’s from VR-Zone claimed that Intel has started shipping new Thunderbolt controllers known as “Cactus Ridge”, which lines up nicely with the Ivy Bridge processors launch to set the stage for upgrades to Mac lines.

“Another aspect that makes the DSL3510 interesting is that it supports multiple internal DisplayPort inputs. What this means is that it could in theory interface with a discrete graphics card as well as the integrated graphics from an Intel CPU. This is likely to be the chip used by Apple in its desktop systems, whereas the more power efficient DSL3310 will end up in notebook products”.