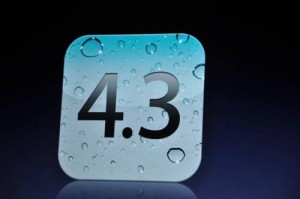 During yesterday’s iPad 2 media event Apple announced that the new iOS 4.3 is to be released on March 11th.

"With more than 160 million iOS devices worldwide, including over 100 million iPhones, the growth of the iOS platform has been unprecedented," said Steve Jobs, Apple's CEO. "iOS 4.3 adds even more features to the world's most advanced mobile operating system, across three blockbuster devices-iPad, iPhone and iPod touch-providing an ecosystem that offers customers an incredibly rich experience and developers unlimited opportunities."

iOS 4.3 will include a number of new features such as: