According to the latest data shared by Apple, the iOS 9 adoption rate has just reached 84%. This means that 84% of all compatible devices that have regular access to the App Store are now running the most-recent version of the mobile operating system. 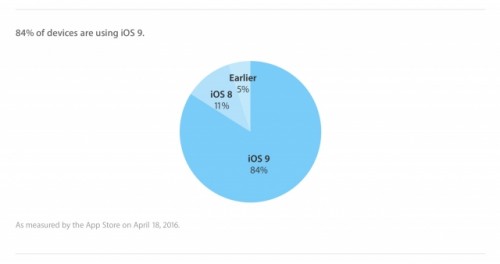 The adoption rate grew 5% since March, even though iOS 9 bricked a wide number of devices immediately after the release of the latest build a couple of weeks ago. Apart from the bugs, iOS 9.3 contained improvements for Notes, Apple Music, Health and News apps that lured many customers.

11% of all iPhone, iPad and iPod touch owners still use iOS 8 and 5% have even older version of Apple’s mobile operating system installed on their devices.

What iOS version do you utilize? Let me know in the comments section below this post.