Apple has just announced the current iOS 9 adoption rate. According to the data based on the App Store usage, the most-recent version of Apple’s operating system for iPhones and iPads is installed on 61% of active devices. That’s a very good result, especially if to keep in mind that iOS 9 was released to public last month. The actual adoption rate may be slightly different as not all iOS devices access the App Store on a regular basis. 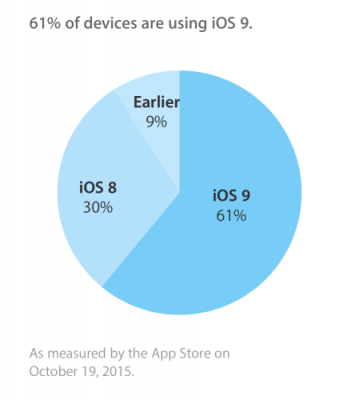 It should be noted, however, that because of a number of bugs found in the latest firmware version, the adoption speed is now slower than it was during the first days of iOS 9 availability. Back in September, people had no idea that the update can cause so many inconveniences.

As to the older versions of Apple’s iOS, they are still installed on 39% of active iPhone and iPad units. 30% of users still have iOS 8 installed on their device and 9% are those who continue utilizing iOS 7 or earlier. These are mostly people who have relatively old Apple products like iPhone 4.

What iOS version do you have installed on your device? Do you plan to upgrade to iOS 9 in the near future? Leave your comments below this short post.