According to the latest data shared by Apple, iOS 9 adoption rate has recently reached 70%. What this means is that 70% of active iPhones, iPads and iPod touch units are now running iOS 9 or a higher version of Apple’s mobile operating system. As usual, the data is based on the App Store usage, so it can be called a reliable source of information. 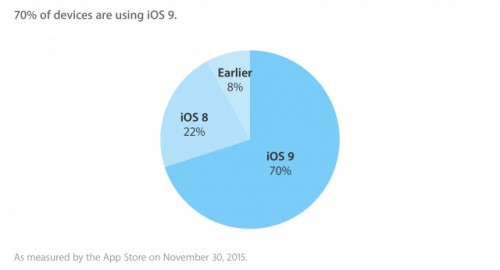 The release of the 12.9-inch iPad Pro as well as strong Black Friday sales have contributed to the 3% increase in iOS 9 adoption over the last two weeks. The number of active iOS 9 users is expected to rise in December due to pre-Christmas iPhone and iPad sales.

It should be noted, however, that 22% of Apple customers haven’t still upgraded from iOS 8. These are mostly the owners of jailbroken gadgets who don’t want to upgrade and lose the jailbreak.

8% of users, mostly those who own an iPhone 4 or an older model, continue utilizing iOS 7 as they can’t update further.

What mobile operating system is installed on your device? I’m waiting for your response in the comments section.