According to the latest report from a research firm called IDC, the combined smartphone market share of iOS and Android accounted for 96.3% in the fourth quarter. Apple’s share managed to reach 19.7% and the share of Android equalled to 76.6%. Just for you to compare: n the last quarter of 2013, Apple’s iOS grabbed 17.5% of the smartphone market and Google’s Android occupied 78.2%. As we see, iOS products become more and more popular, making users change their Android devices to iPhones. The guys from Cupertino managed to sell as many as 74.5 million iPhone units in the fourth quarter. The shipments of all Android smartphones combined accounted for 289.1 million units. 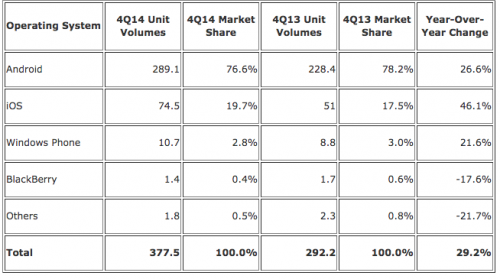 The latest numbers from research firm IDC reveal that the smartphone market continues to be a largely two-horse race between iOS and Android, which accounted for 19.7% and 76.6% market share in the fourth quarter respectively.

If to speak about the platforms, which stand in the third and fourth place, these are Windows Phone and Blackberry. Their market share in the Q4 2014 declined to 2.8% and 0.4% respectively. The share of other operating systems also decreased to 0.5% last year.