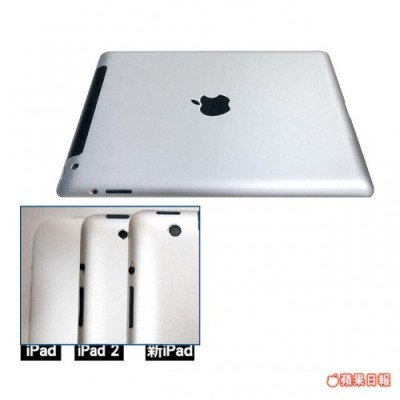 Apple Daily claims to have received the photo above that shows what is claimed to be an overview shot of the new iPad 3 back enclosure (top of image) as well as a comparison shot between the original iPad, the iPad 2 and the New iPad (inset).

The shot reveals the familiar form-factor but the lightning that looks much better in the shot seems to have undergone significant changes. The iPad 3 enclosure seems to have also a more gradual taper to the edges than the iPad 2. As a result of this longer taper, the iPad 3's camera rests on the taper itself.

The absolute positioning of the camera doesn't seem that far off from the iPad 2, but the lens does appear larger. According to NextMedia, the new iPad 3 camera will see a significant upgrade to 8 megapixels. The current iPad 2 back camera is 1 megapixel in resolution.

The "iPad 3" is rumored to sport a Sharp manufactured Retina Display with a pixel density similar to that of the iPhone 4S, wireless 4G LTE connectivity and a proprietary A6 CPU.

Rumors claim that Apple will announce the anticipated next generation tablet on March 7, almost exactly one year since the iPad 2 was introduced in 2011.