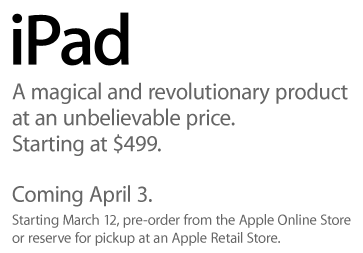 Apple today the date when iPad will go on sale in the USA - it is April 3rd. Models with 3G-module will be available in late April. Preorders for all iPad models will start on March 12th.

Beginning a week from today, on March 12, US customers can pre-order both Wi-Fi and Wi-Fi + 3G models from Apple's online store () or reserve a Wi-Fi model to pick up on Saturday, April 3, at an Apple retail store.

Earlier we wrote that Apple is planning to expand their iBookstore service internationally. Well, in their press-release Apple noted that iBooks will be available for other countries "later this year".