iPhone 6s Plus Tops List of Best Performance Smartphones in 2015

According to the Performance Ranking Report shared by Antutu, Apple’s iPhone 6s and iPhone 6s Plus are the most efficient smartphones of 2015. These handsets easily beat all the rivals including Huawei Mate 8, Meizu Pro 5, Samsung Galaxy Note 5, Samsung Galaxy S6 Edge Plus and a number of other flagship devices. Both Apple-branded handsets scored more than 130000 points in the Antutu Benchmark 6.0. Just for you to compare, the closest rival, which is Huawei Mate 8, scored only 92746 points. 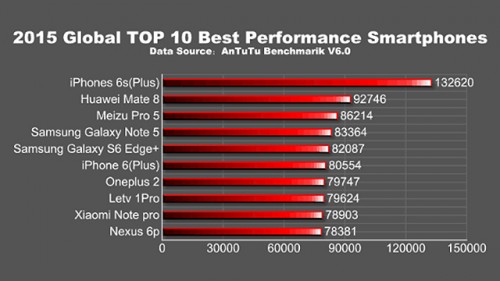 Antutu is out with its Performance Ranking Report for 2015, which uses Antutu Benchmark 6.0 to rank popular smartphones on their performance. Notably, the iPhone 6s Plus decimated the competition, easily taking first place.

The data about the performance of the gadgets is based entirely on Antutu Benchmark 6.0. To check each smartphone model, the experts used about 500 data samples.

Advanced hardware as well as its optimization with the operating system made it possible for Apple to achieve such a good result. Both iPhone 6s and iPhone 6s Plus are equipped with powerful A9 chips that allowed to top the aforementioned rating.

What do you think about the Performance Ranking Report rankings? Leave your comments below.