Google on Wednesday officially announced the annual "Year in Search" results. These results reflect the most popular searches in a wide range of categories. If to speak about the Trending Consumer Tech category, the searches somehow connected with Apple managed to top it. 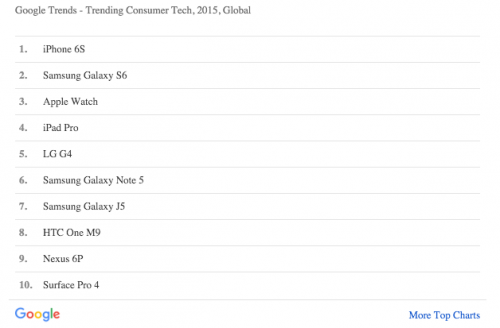 Apple’s iPhone 6s became the most popular search inquiry, the Samsung Galaxy S6 got the second place, the Apple Watch finished in the third spot, the iPad Pro turned out to be the fourth and the LG G4 closed the top-5 rating.

If to speak about the members of the Top-10 ranking, they include Samsung’s Galaxy Note 5, Galaxy J5, HTC’s One M9, Google’s Nexus 6P and Microsoft’s Surface Pro 4.

Last year, Apple’s iPhone 6 got the first place in the same rating, the Apple Watch was the eighth and the iPad Air closed the rating in the tenth place.