iPhone is the Most Social Device

According to the latest research held by ShareThis, iPhone turned out to be the most social device. What this means is that it is most frequently used to share interesting stuff through the social media. Can it be truth or this is simply another Apple’s marketing trick? Let’s find out. 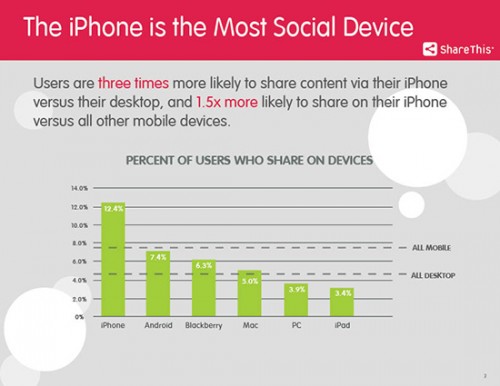 As the researchers claim, a typical iPhone user is three times more likely to share something using his smartphone, than using a desktop computer. Furthermore, those who have an iPhone share content 1.5 times more often than the other smartphone users.

ShareThis has been monitoring 2.4 million sites for 30 days.  The experts estimated that nearly 60% of people use Facebook to share interesting info they find on the Internet, while 40% use Pinterest or Twitter. That’s in general. However, if to speak about iPad users, the numbers are a bit different here - 50% for Pinterest and the rest for both Facebook and Twitter. This is probably due to a bigger screen - it is much easier to share images, videos and large texts via Pinterest app for iPad, I must say. As to the news or small articles, they can be easily shared through the appropriate iPhone applications.

If to speak about me, I share only news or sometimes images, so Twitter is just enough for me. And how about you?