iTunes Festival App Gets Updated Ahead of Big Event, iOS 7.1 Not Required

The iTunes Festival app won’t require iOS 7.1 as was reported earlier. This means that the official release of Apple’s new mobile operating system may take place later than this week. 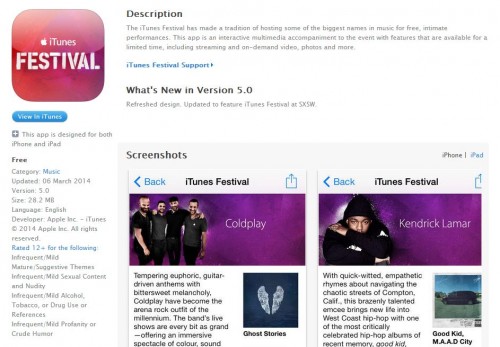 Anyway, let’s get back to our application. It has been updated to version 5.0 and it can boast of revamped icon and design. As noted by ,

Apple's SXSW iTunes Festival is the first it has hosted in the United States, with previous iTunes Festivals occurring annually in London. The festival will offer five free nights of music, beginning on March 11 at Austin City Limits Live at the Moody Theater in Austin, Texas.

The app has been created for those music lovers who can’t visit iTunes Festival or want to save the best moments of the show on their device. Apple promises to organise the live streaming of the event, which will be available for all iPhone, iPad and Apple TV users.

One can download the app from the App Store.