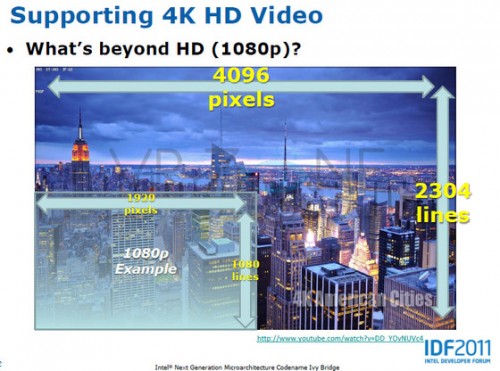 As VR-Zone , last week Intel revealed that their upcoming Ivy Bridge processors will support display with resolution of 4096x4096 pixel and also they will be capable to process video data at this resolution.

Intel’s Ivy Bridge processors will also include a considerably upgraded graphics processing unit (GPU). In general, current high end computers are not limited by the performance of the integrated graphics units. iMacs and MacBook Pros tend to include more powerful third party GPUs. However, slimmer MacBook Airs and Mac Mini must rely only on capabilities of integrated graphics offered by Intel. So the next-generation MacBook Airs should be capable to work with so high resolutions to take all advantages of Intel’s processors.

OS X Lion provides support for ultra high resolutions and it appears that Microsoft is also prepping to add support for such displays.