According to the latest report from IDC, Apple’s computer shipments decreased in the second quarter of 2015. Due to this fact, the company has fallen to the fifth place in the ranking of worldwide PC shipments. Apple’s market share is now equal to 7.1%, down from 7.4% one year ago, and the number of Macs sold to customers worldwide accounted for 4,42 million units, down from 4,82 million units in 2015. The global PC market also experienced a decline of 4.5%. The shipments were equal to 64 million units. 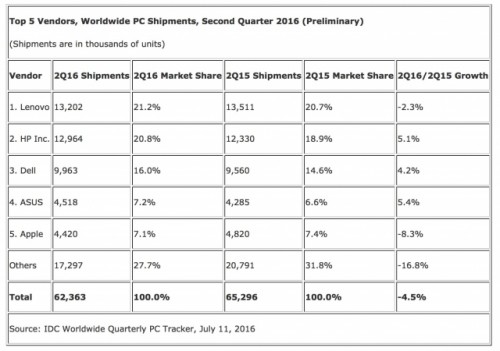 Apple is has shown the worst results in the ranking. Other vendors, namely, Lenovo, HP, Dell and Asus performed slightly better.

Apple shipments experienced a decline over last year as customers wait a refresh of its lineup. Specifically, there have been rumors that the company will unveil a new MacBook Pro with an OLED touch bar.

Apple may unveil new Mac laptops later this year, possibly in October. However, these are only rumors, the company hasn’t confirmed any of those.