« Some iPhones may be delivered earlier
A New Version of iBooks 1.1 Released for iPhone and iPad » 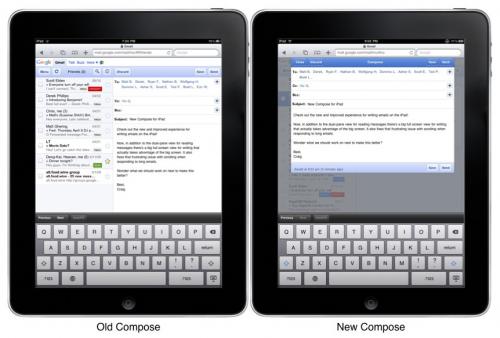 After the iPad launch in early April, Google created a formatted version of Gmail for iPad that uses its HTML5-based platform in order to create a 2-column format which is similar to the one used for Apple’s Mail on iPad. After the launch Google remarked that the process of testing interface design and features of iPad Gmail was still on, and today we have a new proof that the testing isn’t over yet.

The present 2-column interface of the Gmail for iPad is going to be supplemented with a new full-screen window that will appear over the Gmail window and will make it easier to write emails on iPad.

When you start writing an email message, instead of having your screen split into the compose view and inbox you’ll have a large compose window over it. More text will be visible and the messages on the left-hand size won’t keep distracting you. The problems with scrolling in long messages have also been fixed.

The only “but” noted by Google is that the new feature is only installed in the US English Gmail version – for the time being.

Google has also reported that they are still testing the iPad form factor and welcome any suggestions and feedback from the users.

« Some iPhones may be delivered earlier
A New Version of iBooks 1.1 Released for iPhone and iPad »