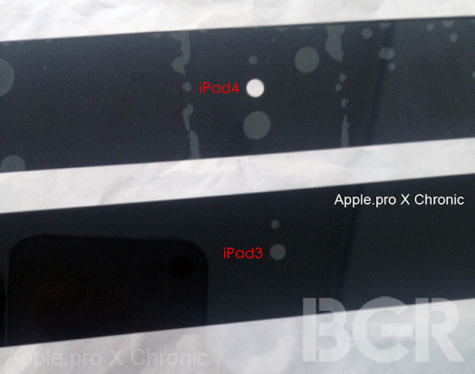 BGR photos of a new display assembly for the updated iPad. But it is unkown whether this part is from the updated iPad 3 expected to be announced on Tuesday or from the iPad model that will launch at a later date.

Reportedly Apple is working on a refreshed full-size iPad that will have an expanded LTE support and lightning connector. According to BGR, it could also have an updated FaceTime camera. The report said:

“The most noticeable changes we can see are the fact that the front-facing camera cutout is larger than the previous model, allowing Apple to include a bigger sensor”.

A bigger sensor could allow to shoot higher quality photos and videos. Currently the iPad’s front camera produces “VGA-quality" photos. The iPhone 5’s front camera was upgraded to 1.2MP photos and 720p video, which suggests that iPad could also develop in this direction.