A bug in iOS 8 has been discovered today, which affects the Messages app users. This bug allows to crash the Messages app or the iPhone using a special chain of Arabic characters and symbols. Immediately after a user receives an iMessage or an SMS with these symbols, the iPhone reboots. If the affected user opens the Messages app after the reboot, the app crashes and continues to crash each time the person attempts to open it. 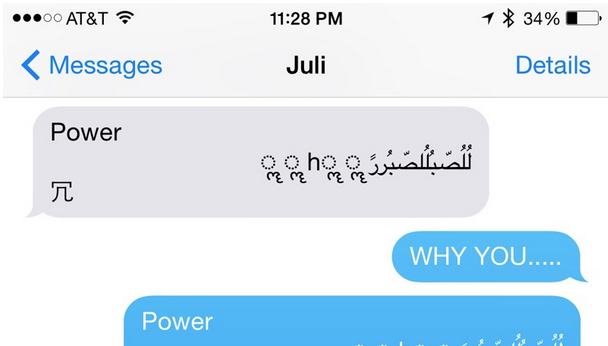 Sending the string of characters to an iPhone results in an immediate respring, causing an iPhone to crash and quickly reboot. From there, if the Messages app was opened at a list view, the Messages app crashes automatically when you try to open it. If it was opened to the conversation where you received the message, the app will open, but attempting to go to another conversation causes Messages to crash.

The good news is that Apple is aware of the issue and is currently working on a fix. To fix the issue by yourself, you can ask someone to send you a message or ask Siri to “Send a message to myself."