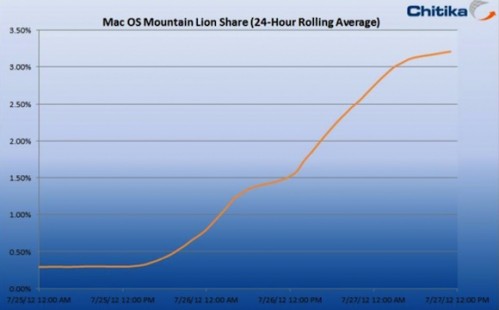 The analytics firm Chitika reports that just over 48 hours after launch, OS X Mountain Lion is already accounting for over 3% of web traffic coming from the Mac platform.

“Moreover, based on Apple’s June 2012 announcement that there are currently 66 million Mac users in the wild, we can infer that 2.11 million Mac users downloaded OS X Mountain Lion in the past 48 hours,” Chitika said. “Using this figure, if we assume that 90 percent of these users paid to upgrade, OS X Mountain Lion generated $38 million in revenue for Apple in the past 48 hours.”

As usual, adoption is faster among those who closely follow Apple news. 9to5Mac reported yesterday that over half of its Mac visitors were already on Mountain Lion after hitting 10% even before the public launch. Moreover, users of new MacBook Pro and MacBook Air are eligible for Apple's Up-to-Date program, which offers a free upgrade to Mountain Lion.