The Pangu team has recently released an update for the jailbreaking utility capable of hacking compatible iPhones, iPads and iPod touches running iOS 9-iOS 9.0.2. Those who have already jailbroken their devices, do not need to do this once again. What they should do, however, is updating "Pangu 9.0.x Untether" and "Patcyh" in Cydia. 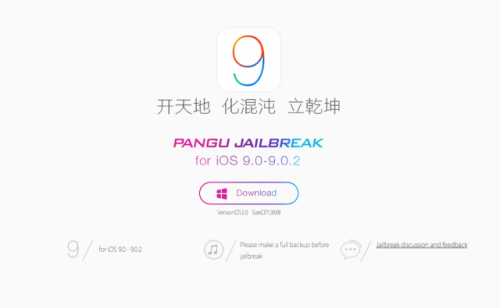 According to the developers of the useful utility, the latest Pangu version can boast two serious fixes. Here’s what they write:

Pangu is a tool for untethered jailbreak of iOS 9-iOS 9.0.2 that is compatible only with Windows-based computers. If you haven’t yet hacked your handset or tablet, you can do this right now using our tutorial. Before jailbreaking, make sure you are not on iOS 9.1 as it is not yet compatible with Pangu utility and don’t forget to backup your device.

By the way, the Library of Congress has just acknowledged jailbreak and unlock completely legal in the USA. It would be interesting to see the reaction of Apple and local carriers to such a ruling.