« Bloomberg: Apple Will Introduce iPad Mini In October
Apple Is Distributing Corrupted Updates For Some Apps » 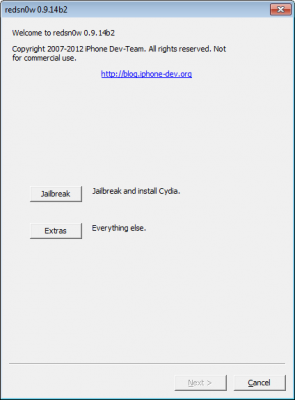 The iPhone Dev-Team released RedSn0w 0.9.14b2 with improved algorithm for baseband downgrade from the iPad's 06.15 baseband to 05.13 on the iPhone 3GS and iPhone 3G. The 06.15 baseband was used by many users to unlock their device. Now it is possible to to get back true GPS and an ultrasn0w unlock.

Typically you’d have the 06.15 baseband if you unlock with ultrasn0w but updated your iPhone baseband past 05.13.04. With this new capability, you can now downgrade specifically from 06.15 to 05.13.04 (even if you never had 05.13.04 on that device before). This gives you the best of both worlds: ultrasn0w compatibility and a normal iPhone baseband with full GPS and the ability to use stock IPSWs again.

The revised steps are:

After the ramdisk gets launched and you see the Pwnapple running on your iPhone, you’ll eventually get to the “Flashing Baseband” step. THIS STEP TAKES A VERY LONG TIME to complete and there won’t be any feedback while its running. Please just let it be for the next 3-8 minutes! When the ramdisk has done its job it will reboot the phone on its own.

For those who are wondering if you can update your 3G or 3GS to 06.15 solely for the purposes of downgrading to 05.13.04, the answer is “yes” for 3G owners, and “maybe” for 3GS owners. The iPad baseband is not compatible with 3GS units manufactured week 34 of 2011 or later. If you have an iPhone3GS and if digits 3-5 of its Serial Number are 134 or later (xx134…), then you should NOT try to install the 06.15 baseband on your 3GS! It will brick your radio, preventing both the downgrade from working and normal iPhone software from using it as a phone! Be warned!

Update #1: If you’re still using ultrasn0w after going down to 05.13.04, many people have reported that re-installing Mobile Substrate and/or ultrasn0w fixes crashes and “No Signal”.

« Bloomberg: Apple Will Introduce iPad Mini In October
Apple Is Distributing Corrupted Updates For Some Apps »