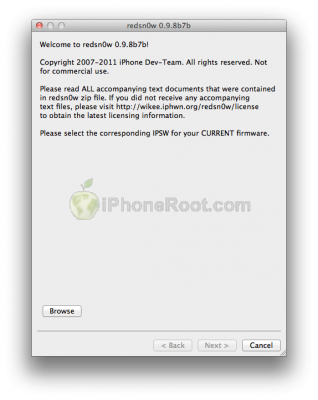 This is great news for both developers and owners of old bootrom iPhone 3GS's who accidentally updated to iOS 4.3.5.

About 12 hours after we released redsn0w 0.9.8b7 with some improvements for iOS5b6, Apple went and released iOS5b7 (what are the odds of that?!?). Even though that redsn0w could still jailbreak iOS5b7, you needed to point it at the iOS5b6 IPSW to do so. Today’s redsn0w 0.9.8b7b lets you point redsn0w directly at the iOS5b7 IPSW instead.

We’ve also added some overall improvements for old-bootrom 3GS owners (where the 24kpwn exploit applies): on those devices, you can tell redsn0w to untether 4.3.5 and lower, or iOS5b7. Old-bootrom 3GS owners can once again choose custom logos, and/or verbose booting (for the really nerdy iPhone3GS fans out there!). And it allows 4.3.4 or 4.3.5 users to use ultrasn0w again (if they have a compatible baseband).

Last but not least, we fixed some lingering Verizon iPhone4 4.2.10 JB issues.

We will update our tutorials shortly.

Got "backup plan" for untethered 4.2.1 JB working (video coming up). Uses mysterious 4.2b3 hashes Cydia kept for you.

"Backup plan" because hacker comex is working on a more extensible jailbreak. We'll keep you up to date with more information as it develops. For now you can watch the proof video: