« Top 10 Stories of the Week
Apple to Release iOS 8.4 to Users Worldwide on Tuesday - Rumor »

Taig team has recently updated their jailbreaking utility for iOS 8.3 to fix a number of issues that caused problems while hacking the device. If you have a jailbroken iPhone or iPad or if you plan to jailbreak your handset or tablet in the nearest future, you can take a look at this article and download TaiG 2.1.3 for iOS 8.3 from . Keep in mind that you hack your device at your own risk. 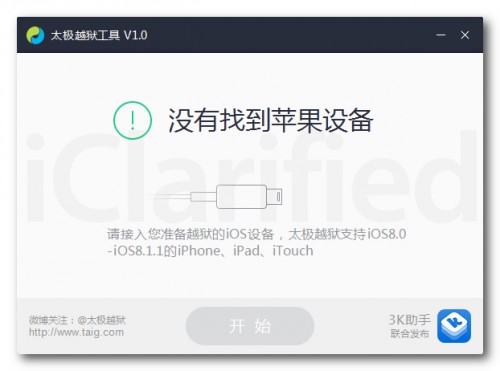 Below you can take a look at the list of changes and fixes made in TaiG 2.1.3:

If you plan to jailbreak your smartphone or tablet, I suggest you to hurry up. You see, the guys from Cupertino may release iOS 8.4 on Tuesday and stop signing iOS 8.3 in a couple of days after this event making it impossible to downgrade to the earlier version of iOS.

« Top 10 Stories of the Week
Apple to Release iOS 8.4 to Users Worldwide on Tuesday - Rumor »