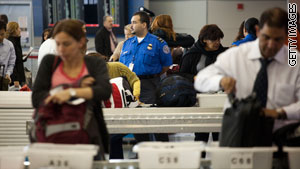 Nicholas Kimball, who is a spokesperson at Transportation Security Administration, told this week CNN that recently presented 11-inch MacBook Airs are small enough that they don't need to be removed from your bag if you're going through an X-ray machine at airport security. MacBook Pro though is still big enough and needs to be researched for the internal components.

It is unknown yet whether 13-inch MacBook Air will also get such a decision, so currently it needs to be taken out at airport security. But it may also be allowed not to be removed as 13-inch model doesn't have an optical and traditional hard drive ещщ.

Earlier this year TSA announced that customers may leave their iPads in bags. But the officials may ask to remove your MacBook Air or iPad in case they cannot get a clear image of the device in an X-ray scanner.

"If someone has a lot of stuff in their bag, it's sometimes difficult to get a clear view of it. It might need some additional screening."