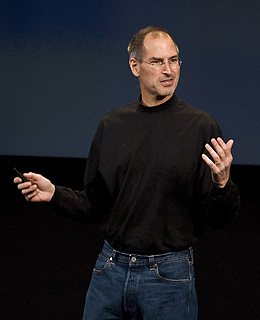 The career of one of America’s most innovative businessmen has been more than just a string of moments, but these 10 peeks at Steve Jobs’s formidable presence will remind you of why his resignation is such a momentous event.

Steve Jobs introduces the Macintosh to the world. Computing would never be the same.

Ridley Scott's famous "1984" commercial for the original Macintosh continues to find imitators, even today. In 2011, Motorola attempted to spoof the classic ad in a promotional spot for its Xoom tablet.

When Bill Gates appeared on-screen at Macworld Boston in 1997, the audience reacted with boos and hisses. Still, the decision to partner with Microsoft and have Microsoft commit to producing software for the Macintosh was one of the most shrewd -- and likely one of the most intelligent -- decisions that Jobs made upon his return to Apple.

Although many incorrectly believe that Microsoft "bought" Apple in 1997, the reality is, without Microsoft's investment and commitment to developing Macintosh software, the company may have had a more difficult time getting its next line of products to the market.

The iMac helped set the standard for the modern Apple even as we know it today. Designed by Jonathan Ive, the iMac was sleek, modern and affordable. This was not the Macintosh of the early to mid 1990s, it was something new.

With the iMac, Apple became cool. We can vividly remember looking at the egg-shaped all-in-one design with the hockey puck mouse and famous lack of a floppy drive and being transfixed. The iMac marked the beginning of Apple 2.0.

Nearly 10 years ago, Apple debuted the iPod. Famously ridiculed and dismissed by Slashdot, it would be several years before the device would become iconic, and in the process, change Apple fundamentally as a company.

The premise behind the iPod was simple: 1,000 songs in your pocket. Its the execution that set the device apart from everyone else.

In 2003, Apple flipped the switch again, with the launch of the iTunes Music Store. In a post-Napster industry, most were skeptical that iTunes could drive music sales. Eight years later, iTunes is the number one music retailer by a large margin.

Ten years on, the iPod is getting long in the tooth, but it still remains the leader in its product category.

After the iPod started to achieve massive success in 2003 and 2004, the rumors of an iPod phone started to swirl.

The first attempt to bring a product like that to the market was in the form of Motorola's Rokr. The Rokr tried to capitalize on the success of the Razr, while also adding compatibility with iTunes.

Still, the device was a dud. You can see Steve Jobs's frustration with the device in this demonstration. The Rokr was an example that only Apple could build an Apple product.

Steve Jobs's commencement speech at Stanford University in 2006 is one of our favorite Jobs moments. It's riveting, inspirational and every bit as good as any Apple product keynote.

All hail the Jesus Phone. The iPhone changed the mobile industry. Full stop. The mobile world and ecosystem that we know today would not exist in the same way that it does now without the iPhone.

The iPhone also changed Apple as a company and helped further cement Jobs's place in history.

9. Steve Jobs and Bill Gates Together

Steve Jobs and Bill Gates are two of the most powerful and influential men of our times. Seeing them together at D5, just ahead of the iPhone's U.S. launch, was amazing.

In January 2010, Apple changed the game again with the iPad. Like the iPod and iPhone, the critics dismissed it and predicted its failure. Its success has outpaced nearly every other technology product launch in history and is having a seismic impact on education, publishing, media consumption and computing in general.

The PC era might not be over, but I'm willing to bet that the computer I use every day in 10 years will have a lot more in common with the iPad than the MacBook Pro.