As you already know, Apple on Monday released slightly refreshed 11-inch and 13-inch MacBook Air models. While both laptops got the same processor and graphics, the larger-screened model was also equipped with a new flash storage that is said to be "up to two times faster" than the flash storage inside of the 11-inch device. iFixit team decided to find out, whether the guys from Cupertino told us the truth about the speed of the SSD. As it turned out, they did. 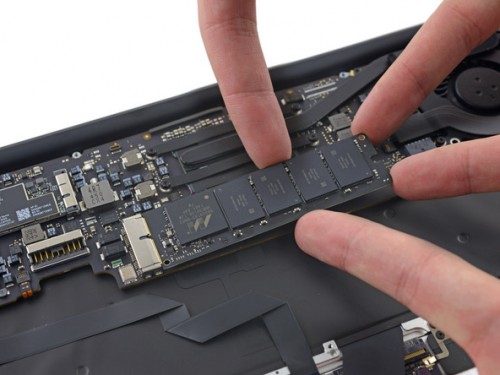 Apart from testing the speed of the SSD, iFixit also performed a teardown of both 11-inch and 13-inch MacBook Air. This teardown revealed that the faster SSD is produced by Samsung and the slower one, which can be found in the smaller laptop, is manufactured by SanDisk.

Unlike the 12-inch MacBook, the updated MacBook Air models are currently available for purchase. If you have decided to purchase one, I think this should be the 13-inch MacBook Air with updated SSD.