The guys from Cupertino on Thursday seeded the third iOS 8.3 beta to developers for testing. The release came about two weeks after the release of the second iOS 8.3 beta, which could boast of new emoji picker, better CarPlay connectivity, the support of Google’s two step verification, new Siri languages and a number of other performance and stability improvements. New beta became available for Apple’s developers just several days after the public release of iOS 8.2, which could bo the official release of iOS 8.2 that featured the support of the Apple Watch. 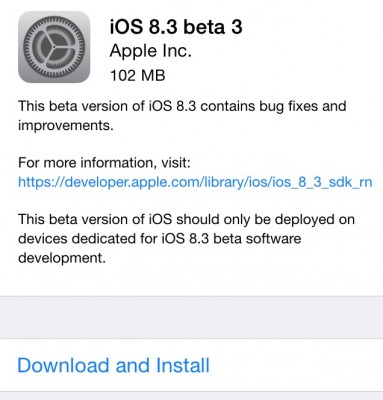 Those who have a developer account, can download the latest iOS 8.3 beta 3 right now. As usual, it is available via Software Update option on your iOS device, or through Apple’s Developer Center. I don’t recommend to install the latest beta on your main device as it can be quite unstable.