According to the latest report from a research firm Apteligent, Apple’s iOS 9.3, which was released on March 21st and contained three major bugs affecting thousands of users all over the world, is the most stable version of the mobile operating system over the last couple of years. The experts claim that iOS 9.3 has the lowest crash rate in comparison with iOS 8, iOS 9 and iOS 9.2. In case you don’t know, a crash rate reflects the possibility of a software glitch or any other problem with the operating system. 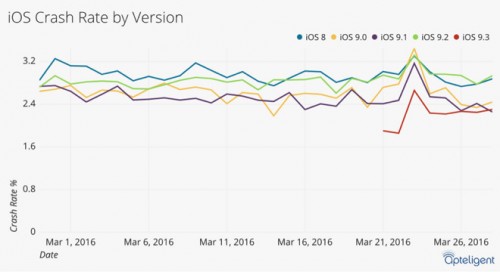 So far, iOS 9.3 has had a crash rate of 2.2%. Compare this to the crash rate of iOS 8, iOS 9 and iOS 9.2 that is equal to 3.2% and to your surprise you will see that the latest build is the most stable one at the moment, even despite the aforementioned bugs.

According to California-based Apteligent, over the past eight days iOS 9.3 has had a crash rate of only 2.2 percent, making it the most stable iOS release in circulation. Apple's new iOS also beat the latest version of Android, which had a reported crash rate of approximately 2.6 percent.

I can believe that iOS 9.3 is the most stable version of iOS as I haven’t experienced any problems with the update or after it. However, those who can’t activate their iPhones and iPads with iOS 9.3 on board or have difficulties in opening web links will surely disagree with the statement above.