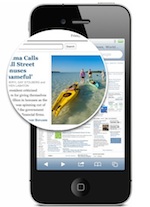 The Japanese newspaper Nikkei reports that Apple and Sharp are partnering to build a 100 billion yen ($1.2 billion) plant in China to produce LCD displays for the iPhone. “Sharp Corp will spend about 100 billion yen to build production lines for small and midsize LCDs, with Apple Inc slated to purchase bulk of the output for its iPhone”, - the newspaper said. Mass production is expected to begin in the second half of 2012.

But Monday’s news reported that Apple and Toshiba were partnering on a $1.2 billion plant. Toshiba responded to the report, denying any investment by Apple.