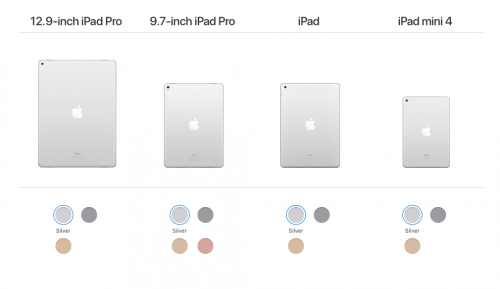 The iPad lineup is very simple and clear now as there are only three versions of the tablet. The first one is the new ‘entry-level’ 9.7-inch iPad starting at $329. The second version if the 7.9-inch iPad mini 4 for $399. Finally, the third version is the iPad Pro. The latter one comes in two sizes: the 9.7-inch model costs $599, whereas 12.9-inch tablet is $799. All of the above are base models, if you are interested in the prices of top-of-the-line devices, make sure you check out Apple’s official .

Apple is rumored to launch a new iPad model later this spring. It is expected to get a 10.5-inch Retina displays with thin bezels and lose the Home button. Stay tuned for more updates.