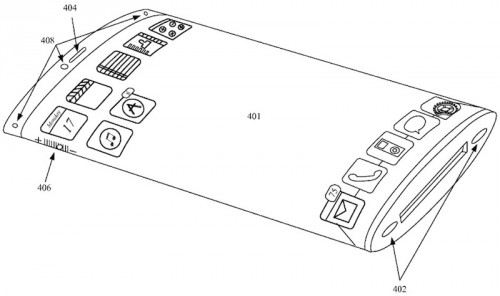 The United States Patent and Trademark Office published an Apple patent application (via AppleInsider), which offers the possibility of using a flexible display in iPhone or in other mobile device with transparent cover as glass tubing or other form. The display would be able to cover the edges and backside of the device, even to make a more visible area.

"This paper describes various embodiments that relate to an apparatus, method, and computer readable medium for creating a portable electronic device with a wraparound display.

In the patent application, Apple explores various options of such devices, including several form factors and the potential use of second internal display under the transparent external display to provide the illusion of 3D content. Apple also offers the possibility of replacing the end plugs to match with specific situations and multiplying devices together to make one big screen.