« One in four iPad purchases are made by first-time Apple owners
Apple is Blocking the SAM Unlock, Backup Your Unlock Tickets! » 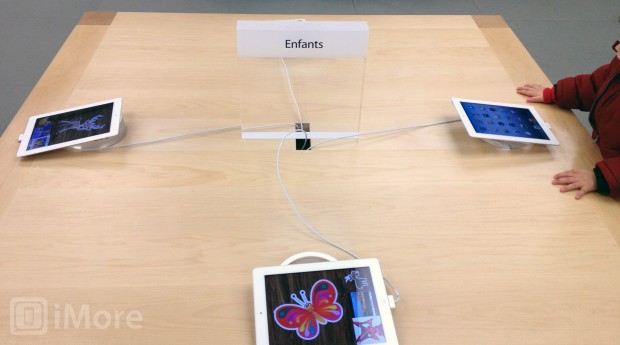 The kid’s table has been one of the major features in Apple Retail Store since the opening of the first location more than 10 years ago. The tables were surrounded by black balls for children to sit on that was made by company and cost more than $500 each.

The switch is definitely right decision on Apple’s part, as iPads are much easier for children to use. Instead of using a mouse to navigate on a large display, children can now navigate their favorite apps by touching the screen.

A few months ago Apple also replaced MacBook Pros with iPads in Genius Bars. It is clear that Apple sees iPad as its future; Tim Cook even said about this fact himself. It obviously makes sense for Apple to hook children while they are young, so they remain its customers for life.

« One in four iPad purchases are made by first-time Apple owners
Apple is Blocking the SAM Unlock, Backup Your Unlock Tickets! »