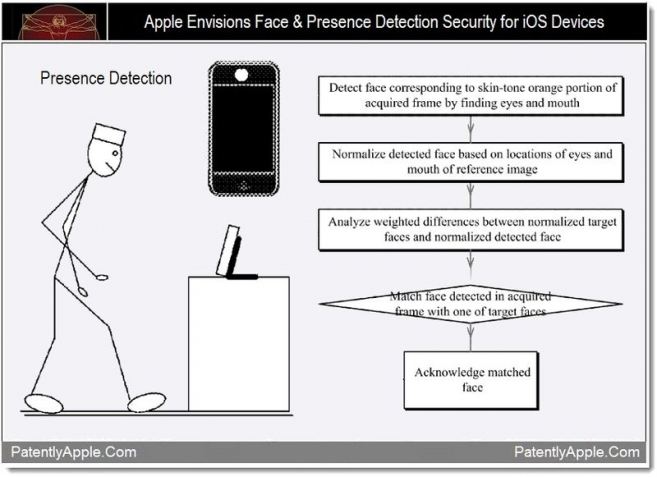 Like the controversial face unlock functionality in Google’s Galaxy Nexus, a new Apple’s patent application points out that the company is developing similar but more sofisticated face detection solution. As PatentlyApple reports, Apple said that these user detection system could be included in a future MacBook, iPad, iPod touch and iPhone. The basics of the patent application are to allow users to unclock their devices such as iPad or iPhone using facial recognition. According to the patent, the device’s camera would be active even when the device operates in sleep mode and the user could unlock the device without neccesity to press the sleep/wake button.

One of the most interesting aspects of this functionality would be the ability to change device’s settings depending on the user recognized. For example, after recognizing a specific user, a device could set custom settings for apps,  notifications, wallpapers and other services. This would allow creating multiple user logins and sharing a device among coworkers or family.

This system would differ from other user detection systems as it would ignore face biometrics. The system could detect such “high information portions” of a face as mouth, tip of a nose and eyes. Also it would apply “orange-distance filter” to detect variations in skin color and determine the “likely presence” of a user and the distance between the user's face and the device.

Back in 2010, before the launch of the iPad, The Wall Street Journal wrote that Appel was working on the system capable to recognize user’s faces with the device camera. Also in November, Apple revealed another patent describing 3D object verification and recognition system that could be implemented in maps, enterprise and home security systems.