Apple is known for the simple, no-frills photos of its mobile devices and, as it turned out, a lot of effort goes into creating those images. To throw some light on Apple’s creative process, The Verge a Peter Belanger, who has worked with Apple for many years. Belanger reveals that Apple pays extreme attention to details when it comes to photos of its products, providing him with sketches and an extensive shot list.

“I work with their talented art directors to translate those sketches into photos. We start by getting the position of the product and then move forward on lighting. Because Apple products have such carefully selected materials it is incredibly important to light the product in a way that will showcase the various materials accurately”.

As shown in the photo below, Belanger uses an elaborate setup of equipment and lights to accurately highlight the design of each product that he photographs. 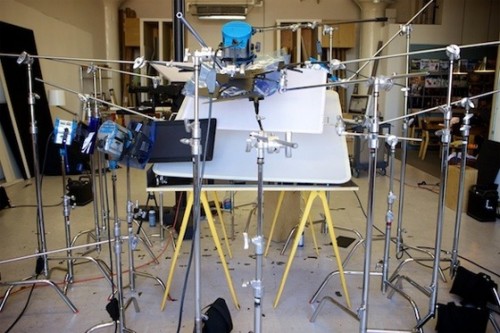 “I pick an area to start with and think about how that material needs to be described. Once that section is done I move on to the next. This is how my sets get so complicated! I need to have control over each and every surface so when the client asks for a highlight to be elongated, I can do that. It's similar to working on a file in Photoshop: you don't do all your work on one layer. I think of my lights as layers that I can adjust individually to get the desired results”.

Belanger said that most of the work is done using the camera, but the post production is used for putting the finishing touches. He shoots the majority of his photos with the with a 24-70mm lens.