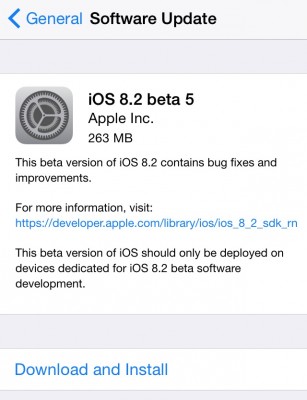 Yesterday’s iOS 8.2 beta has a build number 12D5480a. As usual, it contains minor stability and performance improvements as well as a number of fixes. These fixes reportedly include those for Facebook and Calendar apps, which previously used to work improperly because of bugs. If to speak about new functionality added to this version of iOS, well, looks like there are no truly new and unique features.

Those who have a developer account can download the latest iOS 8.2 beta with WatchKit SDK and Xcode 6.2 beta 5 either from Apple’s dev portal or using the Software Update section of their iPhone or iPad. Keep in mind that it is unsafe to install this beta on your main device as it may be quite unstable.