Apple has recently released iOS 9.2.1 to users worldwide. The release comes after several weeks of testing performed by registered developers. The latest update contains a number of minor bug fixes and security enhancements, so it is recommended for all users to download and install iOS 9.2.1 on their compatible iPhones, iPads and iPod touch units. 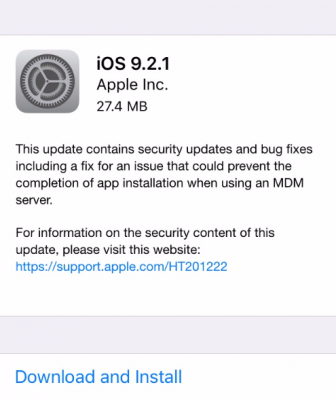 Here’s what Apple writes about the latest update:

This update contains security updates and bug fixes including a fix for an issue that could prevent the completion of app installation when using an MDM server.

To find out more about the security content of the latest version of Apple’s mobile operating system, you can visit this webpage: https://support.apple.com/en-us/HT201222

To update to iOS 9.2.1, you can use either the Software Update section on your device or iTunes on your Mac or PC.

Apple is already working on iOS 9.3 with a number of new features and bug fixes. Stay tuned for more posts about the upcoming update.