Apple on Monday released the third beta of iOS 8.4 to developers for testing and the second beta of its newest mobile operating system to the members of public beta testing program. The release came two weeks after the release of iOS 8.4 Beta 2 and nearly a month after the debut of the very first testing version. According to what the guys from Cupertino say, the latest beta contains a number of improvements and bug fixes. 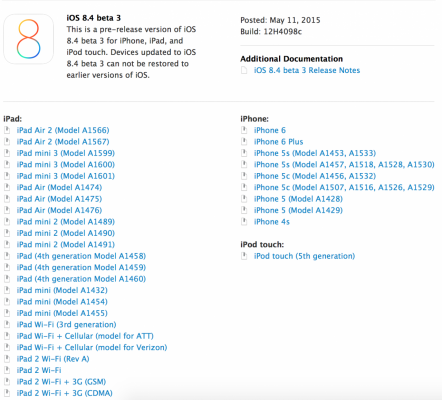 The third iOS 8.4 beta has a build number 12H4098c and can boast of a revamped Music app, which is expected to support Apple’s long-anticipated Beats-based streaming music service. The launch of this service may take place at Apple’s Worldwide Developers Conference scheduled for June. The latest iOS beta brought some stability and performance enhancements to this new app as well as some tweaks and fixes to iTunes Radio. Looks like there are no other changes in this version of Apple’s mobile operating system; only those that are connected with the Music app.

If you have a developer or public beta tester account and a compatible iPhone or iPad, you can download iOS 8.4 Beta 3 right now. It is available either through the Software Update option or from Apple’s developer portal.

The most-recent update contains a lot of bugs, that is why I don’t recommend you to install it on your main device.