Apple has recently announced that it will be raising the App Store prices in seven countries, namely, Canada, Israel, Mexico, New Zealand, Russia, Singapore and South Africa. The main reason for reviewing the price policy is connected with the exchange rate fluctuations in the aforementioned countries. 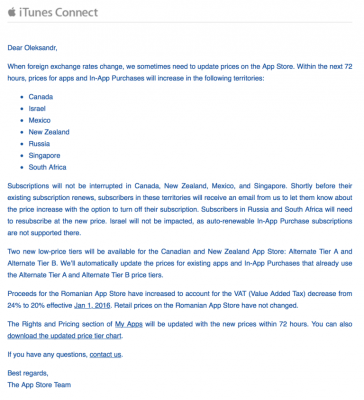 Apple has already notified the developers that it will be changing the app prices in several countries within next 72 hours.

Apple has announced that it's raising App Store prices in seven countries including Canada, Israel, Mexico, New Zealand, Russia, Singapore, and South Africa. The changes are being made due to foreign exchange rate fluctuations.

If you live in one of the countries mentioned above, soon you will notice the change in the pricing of the applications on the App Store. From time to time, Apple changes the prices in the countries with unstable currency exchange rates. Sometimes such changes are connected with other reasons as well.