As you probably know, last week, a research firm BGR released a report suggesting that Apple’s iOS 8.2 will be released to users worldwide this week. Now the analysts claim that the release will take place next week as the guys from Cupertino decided to release final beta to their retail employees and carrier partners to make sure the new version of mobile operating systems works fine. 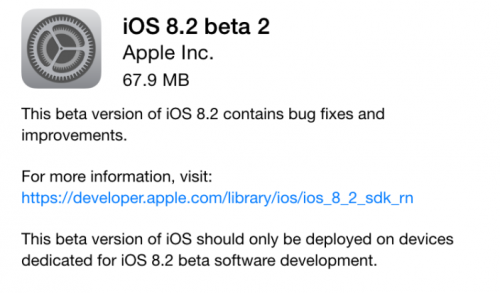 This final beta has a build number 12D508 and contains the support of the Apple Watch, several enhancements of Health app, Flyover feature in Maps, Music, Mail, VoiceOver and Made for iPhone aids as well as a number of general stability and performance improvements and bug fixes. Apart from the aforementioned things, the update also may contain a fix for the recently discovered "FREAK" security vulnerability, which affects iOS and OS X devices.

While the initial report was incorrect, this new timeframe appears more plausible given Apple's upcoming "Spring Forward" media event for the Apple Watch on March 9.

The exact day of the release remains unknown. Stay tuned for more information about the release of the next version of Apple’s mobile operating system.