According to the latest report from a research firm Consumer Intelligence Research Partners (CIRP), Apple’s market share in the United States grew from 28% in March 2015 to 40% in March 2016. What this means is that customers still prefer Apple products and continue buying them. In comparison, Samsung’s share rose from 36% to 37% over the last twelve months.

It should be noted, however, that the aforementioned report is based on the survey conducted by CIRP among only 500 people, so its results should be taken with a few pinches of salt.

Anyway, the numbers shown in the chart below demonstrate a general trend - while the shares of Apple’s rivals decline slowly, the Cupertino-based tech giant continues to improve its position on the market. 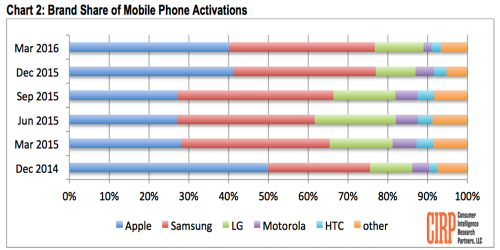