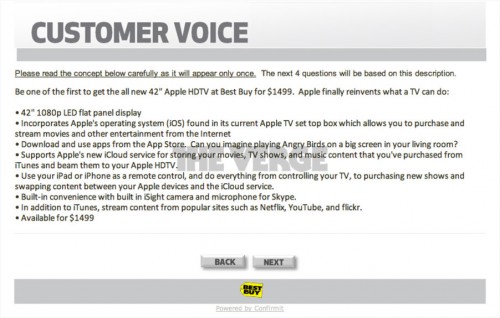 Best Buy has decided to carry out a survey related to the rumored Apple’s HDTV powered by iOS that, noteworthy to say, has not been released yet. The questionnaire notes that the 42-inch Apple HDTV "finally reinvents what a TV can do," with a 1080p LED flat panel display, connectivity with iCloud, and the ability to use an iPhone or an iPad as a remote control, and "iSight" camera. Such details, however, look like speculations on the part of Best Buy. Since introducing FaceTime video chat, Apple has referred to its forward-facing cameras as FaceTime cameras, not iSight.

Be one of the first to get the all new 42" Apple HDTV at Best Buy for $1499. Apple finally reinvents what a TV can do: