Apple’s Senior Vice President of Software Engineering Craig Federighi replied to the user named Caleb about whether the iPhone battery life improves when you regularly close apps on your device or not. Originally it was a question to Apple CEO Tim Cook, but Mr. Federighi explained in a short form that this move will not help at all. 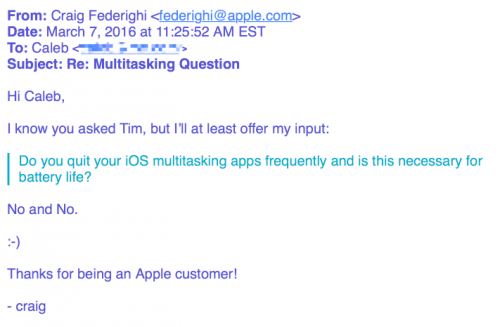 It is widely believed among Apple users that if you force quit all the unnecessary apps your battery will last longer and the device will function better as well. In theory, this shouldn’t be true, however, not long ago, there was a problem with the Facebook app that continued playing audio in the background, so quitting it did actually make sense.

Anyway, Federighi’s point is clear – if you think that closing the apps on your smartphone will let your battery work longer, you’re simply wrong.