Microsoft has just made its virtual assistant Cortana available for a number of iOS beta testers. The personal assistant developed specifically for Windows Phone platform is expected to debut on iOS sometime soon and become a serious rival for Apple’s Siri and Google Now. 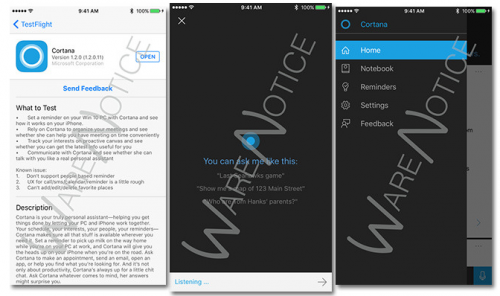 Those who signed up for Microsoft’s beta testing program earlier in November, are now receiving invitations to test Cortana on iOS. The number of such testers is relatively small, but they deal with the very first iOS version of Microsoft’s virtual assistant, so that’s not strange at all.

Cortana for iOS is just the same as the native version for Windows Phone platform. It is capable of creating reminders, searching for information, writing and sending messages and performing other actions typical for voice assistants.

Microsoft is positioning Cortana as more than a virtual assistant, however. The company touts the service as a cross-platform tool for people who might use PC at the office and an iOS device at home. For example, setting a location-based reminder on Cortana for Windows will push that event to Cortana for iOS, which uses iPhone's geolocation assets to trigger an alert.