Following yesterday’s leaked images showing the interior parts for the next-generation iPhones with 4.7-inch and 5.5-inch displays, two more photos surfaced on the Internet today, which once again prove that the smaller handset will get a 1.810 mAh battery. 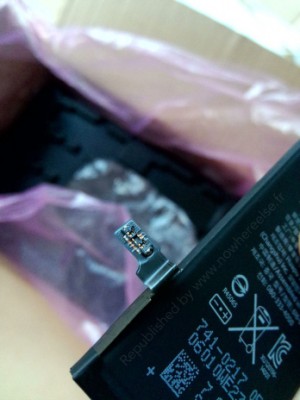 The battery on the images looks just the same as those that appeared earlier this week. It seems as if the guys working at Foxconn have nothing else to do; they only take photos of the batteries, logic boards and panels for the upcoming iPhones and publish them on the Internet.

Photos of the smaller next-generation iPhone’s 1810 mAh battery first hit the web in July, and these new photos add weight to the previous photos being legitimate.

As you probably know, the capacity of the battery of the current iPhone 5s is 1.550 mAh. Apple’s new smartphones are expected to get larger screens, faster processors, improved Touch ID fingerprint sensors and a wide number of other important improvements, that is why they require more powerful batteries.

Apple will officially unveil its iPhone 6 on September 9th. The devices from the first batch will hit the store shelves at the end of September.