Apple on Tuesday announced its financial results in the fourth quarter of fiscal 2015. Apart from record-breaking iPhone and Mac sales and incredible revenue, the company also reported about the number of iPads sold over the last couple of months. According to the official figures shared by the company, the number of iPads sold to customers worldwide in the fourth quarter is equal to 9.8 million units. Unfortunately for Apple, this figure demonstrates a 20% year-over-year decline in global sales. Even though Apple continues to be one of the leaders of the tablet market, looks like nothing can stop it from stagnation.

The analyst Benedict Evans has recently shared a chart showing how iPad sales declined since the debut of the original first-gen iPad back in 2010. 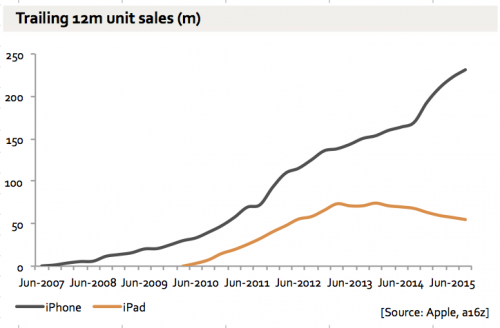 The chart below shows trailing twelve month unit sales in millions. Apple today announced that it sold 9.883 million iPads in its fourth fiscal quarter of 2015. That's a 20% year over year decline.

Back in September, Apple announced the 12.9-inch iPad Pro targeted at the enterprise market. Even though Apple placed limited orders for the launch quarter, the device may become quite popular among the users.