How People Actually Use iPads 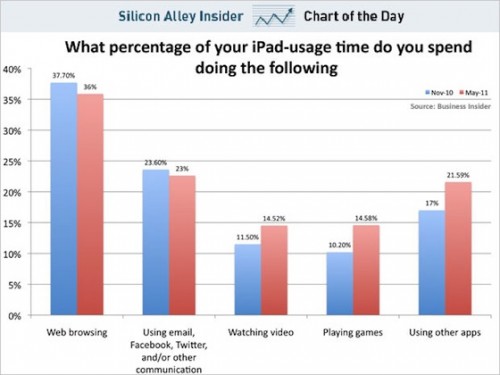 Silicon Alley Insider has posted a chart showing the comparative results of reported iPad usage from November 2010 to the current month of May 2011. Since November, Apple has sold well over 10 million iPads, so it's interesting to see how behavior with the iPad is changing.

As you can see from the chart above, the most important app for the iPad remains Safari. After Web browsing, which came in at 36%, emailing, Facebook and Twitter usage on the iPad came in second place at 23%. Social networking was followed by "other app" usage at 21%, and after that, watching videos and gaming virtually tied at around 14.5% each. Noteworthy to say that video, gaming, and general app usage are all up since the last survey. The results from this informal poll show that the iPad is still primarily a consumption device as opposed to a creation device, but with apps like iMovie and GarageBand for iPad, not to mention all of the other ways iPads are being used to create content rather than just watching it, that could be changing quickly.