iOS 7.1.2 to Come Soon With Lots of Improvements?

According to the latest rumors, Apple may soon release iOS 7.1.2 with a number of improvements. These improvements will reportedly include fixes for email encryption issue as well as for iBeacon and Lock Screen issues. This means that Apple’s iOS 7 may become even more secure and stable. 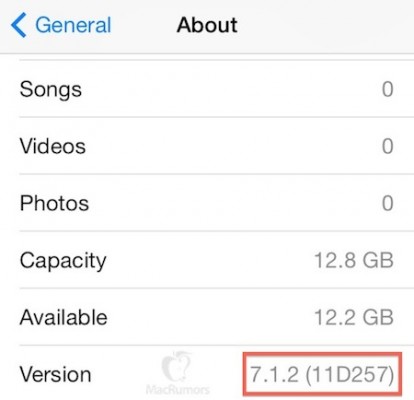 Now more information has surfaced regarding iOS 7.1.2, and it looks like the update will bring fixes for mail, Lock Screen and iBeacon issues. According to sources, 7.1.2 does indeed fix the email attachment encryption issue as well as another bug impacting email downloads.

The guys from Cupertino have reportedly begun seeding iOS 7.1.2 (build number 11D257) to carrier partners for testing. As to the public release, it may take place after June 27th, people familiar with the matter say. iOS 7.1.2 is expected to become the last iOS 7 version before iOS 8 release this fall.