« Apple to Release 4-inch iPhone in 2016, Add 3GB of RAM to iPhone 7 Plus - Rumor
Apple to Change Usual Product Update Cycle and Launch iPhone 7 Much Earlier? »

Apple has just revealed the numbers that deal with iOS 9 adoption rate. According to the data based on the App Store usage, iOS 9 is now installed on 66% of active devices that access the App Store on a regular basis. In case you don’t know, two weeks ago, the adoption rate was equal to 61%. The reason for the 5% gain in just two weeks is most likely connected with the release of iOS 9.1, which contained a number of stability, security and performance improvements, bug fixes and new emojis. 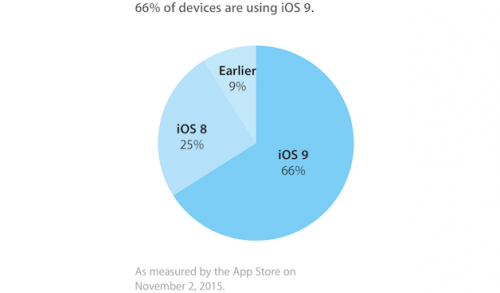 iOS 9 is currently Apple’s most successful mobile operating system with the fastest adoption rate. It has even beaten the results of iOS 8, which was released to users last year.

Despite being installed on 66% of active iPhones, iPads and iPod touches, iOS 9 is not the only version of iOS used by customers worldwide. According to the same data, 25% of users continue to utilize iOS 8 and 9% of devices still have an earlier version of operating system on board.

Have you already upgraded to iOS 9? Are there any reasons that prevent you from doing so? We’re waiting for your comments below this article.

« Apple to Release 4-inch iPhone in 2016, Add 3GB of RAM to iPhone 7 Plus - Rumor
Apple to Change Usual Product Update Cycle and Launch iPhone 7 Much Earlier? »